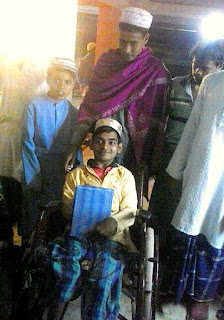 Kurshid’s father repairs umbrellas from home and his mother is a housewife. His family has been struggling to manage his physical challenges in motor movements and speech. Kurshid’s parents sought medical support and took him to several institutions for support. To some extent, their economic status prevented them from exploring more options. Kurshid needs help with most of his daily work, including being fed as he has poor hand to mouth coordination.

Kurshid showed keen interest in studies and school. His mother would carry him to the Kuldia High School where he enrolled for Class I. In Class IV, Kurshid was gifted with a wheelchair and started to go to school on it. However he still needed someone to take him to school; he had to be lifted from his chair and taken to his respective class. As he grew older Kurshid started missing school.

Intervention by Social Investigator and YRC

As the YRC members had started working with adolescents in the community, Kurshid was also part of the YRC support group. When SI Tajrul and YRC Members Azahar Salauddin and Rakibul asked him about missing school, Kurshid mentioned the need for an escort; the upper part of his body was now heavier than before so it was difficult for his friends to carry him to his classroom which was typically on the first or second floor. Even though many friends were supportive, Kurshid himself was uncomfortable.

The YRC members promised Kurshid and the family that they would help him reach school. As a YRC, KYP had a good rapport with stakeholders. The members felt that they should approach the school and discuss its role in supporting Kurshid. They met the Headmaster of Kuldia High School, informed him about the student and the difficulty faced by him in reaching his class.

The Headmaster readily agreed with the YRC members, but because the School was in mid session, he promised to make necessary changes from the next cycle. The plan was to change the class allotment such that Kurshid’s classroom was always in the ground floor and he didn’t have to be carried up the stairs.

KYP members motivated Kurshid to continue visiting the Support Group sessions at the YRC. They kept in touch with the school, following up on their agreement, and in course of time, the school did make necessary arrangements in the beginning of the session. Kurshid was now in Class X.

Kurshid is now regular at school as well as the YRC support group meetings. He manages to study on his own at home. When Kurshid first saw the HIWEL computer at the KYP Centre he was very excited. The YRC members had to tell the other children to help him use the computer and the keyboard. YRC members took turns help Kurshid master the use of the keyboard. While Kurshid has managed to acquire this skill, he is upset that he has to miss computer classes at the centre because of the upcoming board exam!

Kuldia High School management has built a ramp so that Kurshid’s wheelchair could at least be taken right next to his class which in on the ground floor of school.

KYP members celebrate Kurshid’s successes in the YRC; recently he won the quiz contest at the Madrasa. Kurshid dreams of giving the competitive examinations and getting a government job.

About two years on, during his class X board exams, Khurshid's story was picked up by a local newspaper Kalom. The article, published on February 3rd 2016, focussed on Khurshid's courage to pursue his dreams, and the role played by the Headmaster and Block Development Officer. 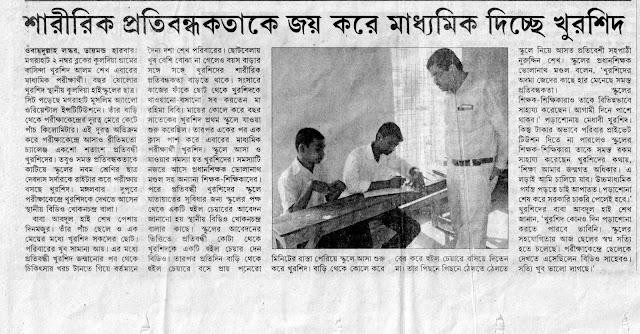 [If you felt something after reading this post, please leave a comment; it would mean a lot to this young author!]