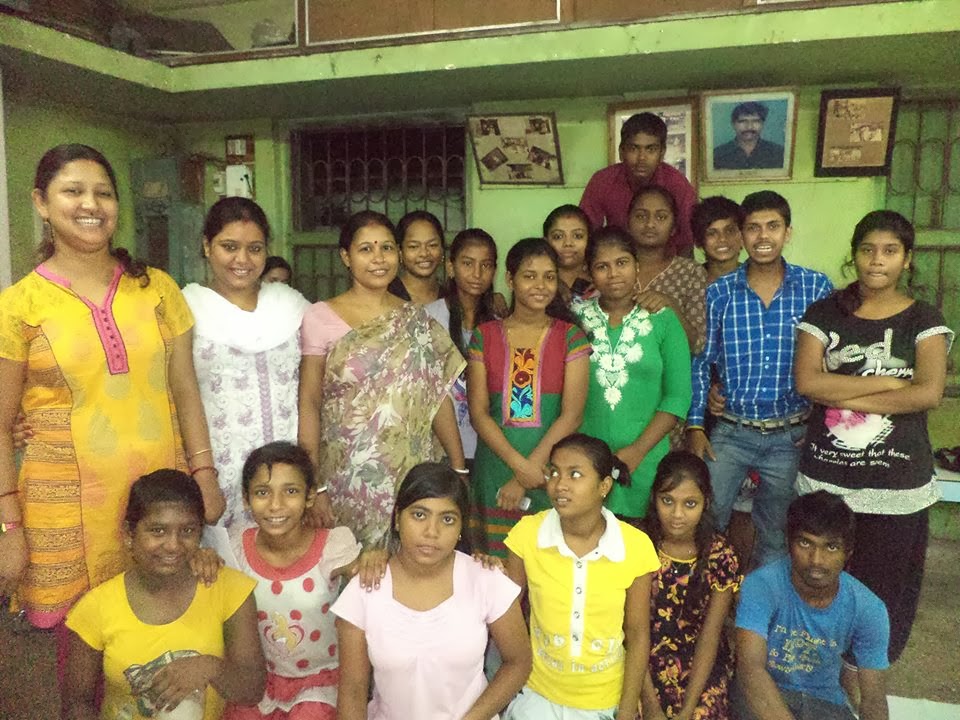 [Durga Puja is the biggest festival in these parts. Not only is it celebrated with great fanfare in every street of the city, the festival is in fact celebrated all over the world wherever there is a Bengali community. Preparations begin months in advance, until finally, over ten days, the story of the mighty Mother Godess Durga unfolds. She is worshipped as the slayer of the most troublesome and evil demon in the universe. In the city, every neighbourhood proudly puts up their own installation for the different ceremonies. Community members accept it as their duty to contribute money to the local Puja committee. This community contribution is called Chanda in Bengali. It is collected door to door by men, who are usually the ones in charge. This is an account of how YRC Nabadisha challenged the norm. Excerpts from group interview with members Uma, Punam, Abhijit - recorded by Urbi Bhaduri, November 18, 2013]

“Our community Pujo is six or seven decades old, but in all these years, never before have women gone door to door collecting chanda from the para members.

Two things were different this year. We had an all girls team from Nabadisha who went to collect chanda; and Sharmishtha, a girl, was elected as the secretary of the Pujo Committee for the first time.”

Out of about 200 households in the para, only about 50 were okay to see the girls in this new unusual role. Most households were critical, even hostile to the girls.

“Have the boys all died, that they have sent you?”
“Why have you come?”
“Send those who are in charge.”
“Send the boys across later. We will pay then.”
“Don’t you have any work? Go back home.”

The girls quipped back. If it was inconvenient to pay now, they would return later — but not the boys. In the houses where they faced the most criticism, they invited the girls to come out too and collect chanda. In one house, an argument broke out when a family member said that rape was on the rise because women were getting more freedom.


“We went through the whole process — collected the money, then sat on the roadside to work out the accounts, signed the document and submitted it to the treasurer. The boys team and the girls team sat together at the end of the day to discuss the experiences.”

All of it was new for the girls. But they did manage to collect more than the boys.

“We collected the money alright, but had no idea how the committee spent it. ‘That's for the bigger heads to decide’ one of the men told us. Later we talked about this; people may ask us how that money was used, and then we should not look blank. Next year may be we should know, and have a say, on how the money is spent.”

“The YRC actually started in 2008, when we named it Nabadisha [New Direction]. Before this, Uma, who had done a gender workshop at TF, had been talking to her friends and cousins in the para — about the things she had learnt there. But the group as such didn’t exist until we named it.”

“Earlier it was rare to see girls of our area going out of home, discussing something, or simply having fun. Now they have an identity for themselves. It was considered a bad thing to hang around the Lake or the Safari Park area. But now this space has opened up for our meetings. It is now seen as a place where healthy discussions are held. Parents seem to be giving more space to their children nowadays, thanks to Nabadisha. We can go and sit in the Club-house [belonging to a separate all-male club], which we hesitated to do earlier. We are using para resources like this more freely now, which had always been our right.”

“The group has come to be regarded more and more as a Resource Cell. For example, recently a group called SEBI sent a letter to our group saying that they wanted to train 40-50 people from the group. SEBI is a Government Group working to prevent chit fund scams. They wanted to hold an awareness programme and approached us, knowing that we could easily gather the number of people they needed. This offer came from a member of our community associated with SEBI.”

“Nowadays if there is a problem in the para — family problems, domestic violence, sexual harassment, children dropping out of school — community members approach us. We try our best to mediate or counsel, or accompany someone to the police station if necessary. Adolescents come to us with many questions, things they want to discuss in secret — about crushes, for example. Group members sometimes bring over friends who are in trouble. Recently a young girl came in through a group member — her family had found out about her affair and were putting a lot of pressure on her to get married.”

“Adolescents hunger for a space of their own, to develop an identity. They want to be visible, to be part of group events. The group opens up various such spaces to fill these needs. Getting to know the facts about the physical and emotional changes they are going through, its making them stronger. Now they have the option to choose well, stay safe. Many children can't speak freely with their parents. They are often getting the support they should have got from their families from the group instead, and this is making them better equipped for life at home. For example, Abhijit is handling his family life better after coming to the group.”

“Because of the group there have been many small changes around here, which we think are significant. For example…